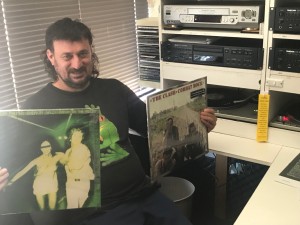 Ben has been involved with 3WAY since 1992. He hosts ‘Vinyl Mix’ every alternate Thursday from 10am to 11am when he plays tracks from his extensive collection of LP records. He also presents ‘Spin Some Discs’ every Friday from 9am to 11am (more vinyl gems!) before joining Wayne and Norm for ‘Good Times & Great Classic Hits’ from 11am to 1pm playing mainly 80s and 90s pop music. Ben reckons he loves to see records spinning in the 3WAY studios and watches the labels go round and round and round. He also enjoys the artwork on LP covers and the information on the inserts.
Ben lives in Koroit and has also lived in Kingston, South Australia and in Queensland. When he is not searching out new LPs and collectors’ items from shops in Warrnambool, he plays lawn bowls for Koroit. He has won several medals in the sport. In his younger years, Ben learned to play the trumpet and plans to begin practising and performing again. He may even get a guitar and keyboard to expand his musical repertoire. His other pastimes include watching movies and DVDs; he also likes watching American football (Gridiron) on television.
Apart from new vinyl albums and the occasional 45rpm record, a large jukebox is on his wish list of future purchases.