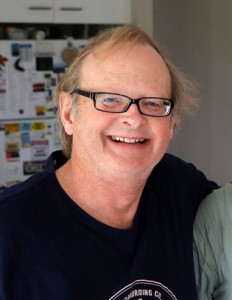 I have been with 3WAY FM for close to 19 years. I joined in 2000, soon after my family and I moved to Warrnambool from Terang. I have served on the committee for virtually all of those years and my main non-program role was firstly the creation of our 3WAY FM website, and following that, it’s maintenance, upkeep and updating of season programs, and other information as needed.

My interest in radio developed with the opening of Australia’s FM band in 1975. I lived in Ballarat at the time and the few FM stations available transmitted from Melbourne. We didn’t have local TV stations (except, from memory, ABC 3 and Channel 6, rebroadcast Channel 9) and had to use pretty high TV aerials/antennas to pull other TV stations. I used the TV antenna to listen to Melbourne FM radio stations, specifically ABC FM. No, I’m not into classical music which ABC FM played almost exclusively. There was a show called Rocturnal that ran from 11 pm Saturday till 6 am Sunday that I started listening to in 1976. I would listen to David Woodhall and his music program until I had to go to bed and then use an audio tape to capture another hour of the program that I would listen to when I woke up on the Sunday. David Woodhall essentially helped form my music appreciation. He played a diverse, often eclectic, range of music, much of which was not played on any other stations and much of the music he played was from overseas, for example, European artists such as Vangelis (before he became famous) and many others. Fortunately in Ballarat there was a record store called Oregon and/or Eureka Records that was able to import much of the music, as vinyl LPs, I heard on Rocturnal.

My first 3WAY FM programs were based heavily on the former Rocturnal show I used to listen to. Playing rare, unusual, long, ambient, avant garde and other types of music. I called my show Underexposed to focus attention on the fact that I would be playing mainly music that is not played on most mainstream radio stations. Initially I started out with a time slot at 11 pm Wednesdays but after a couple of seasons I was shifted to 10:30 pm Tuesdays which I am still at.