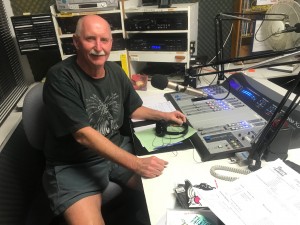 Garry has been involved with 3WAY for over 18 years. He hosts ‘Volcanic Rock’ each Wednesday from 8pm to midnight and is also on the roster for ‘Headless Chickens’ which airs on Sundays from 1pm to 3pm. Garry is a huge fan of classic rock, especially the harder variety. When not tuned in to 103.7, he enjoys listening to talkback radio.
Apart from an interest in radio and broadcasting, Garry likes to watch local footy and cricket, having a keen interest in the Warrnambool Football Club and Nestles Cricket Club. He is also a long-time member of the Collingwood Football Club.
Garry’s love of music is evident in the series of concerts he organises for local bands in the CREW room at 3WAY. These events showcase SW Victorian performers and, because the gigs are usually broadcast ‘live’, give listeners the opportunity to hear artists they may not otherwise ever hear. The first Sunday concert was in March 2014 from 10am to 6pm; it was broadcast, recorded and released on CD. The annual ‘ live to air ‘ ‘ Volcanic Rock’ Christmas Party is also very popular.
Garry is particularly keen on the progressive Aussie rock that was produced in the late 1960s and early 1970s. He has been able to interview many musicians from the Australian rock scene including Doc Neeson, Jim Keays, Richard Clapton, Brian Cadd, Russell Morris, The Brewster Brothers (The Angels), Mike Rudd, Kevin Borich, Gil Matthews, and Warrnambool rockers Airbourne. Some of his favourite Aussie acts are Billy Thorpe, Rose Tattoo, Buffalo, The Angels, AC/DC and Madder Lake. Overseas favourites include Joe Cocker, Black Sabbath, Status Quo, Deep Purple and Motorhead.