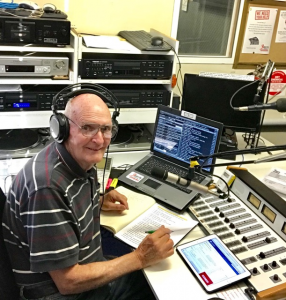 I am of “that” age with children, grandchildren, and great grandchildren. I’ve been with 3WAY for over 10 years and I am involved with two country music programs. I have been involved with music in some form for most of my life. In the late 1950s playing drums in the local pipe band, then early 60s playing at the local Palais in a guitar band, then mid 60s in a big band (Jazz) from Terang. The first night hotel laws changed from 6pm to 10pm closing in 1966, I played in a local hotel with a four-piece group and stayed for the next five years. I had regular hotel work for the next 30 years in a number of venues, including some early theatre group productions, and I also played the organ in a number of local churches.

I grew up on a farm in Woodford, but defected to milk production, working at Nestle as a tradesperson for over 40 years, enjoying my time on trade work that I loved, and with great workmates. I was able to retire early, and, along with my wife Edna, have been able to enjoy long extended winter holidays every year with family in NSW & QLD, but I missed out in 2017 due to health issues.I have many other interests, a good workshop, and many friends that somehow seem to require little jobs fixed regularly. There is some truth in the saying “How did we ever have time to go to work?”3WAY is a great asset to the Warrnambool community with a large variety of local entertainment for our community. I would like to wish them all the best for the future.”