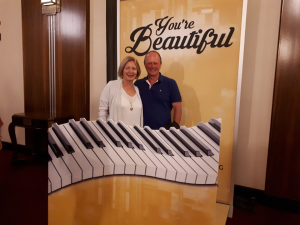 I was born in Melbourne and lived in east Melbourne till I was 5, then Ferntree Gully until just before I turned 18.

I started to learn to play the drums when I was 10 and music was my main interest in my teenage years. I would always be listening to the current pop songs on the radio and watching the pop groups on the TV. I was always hoping that one day I would be a drummer in a famous pop group. One day as I was listening to the radio, I thought it would be such an exciting job to work as a disc jockey and actually get paid to play my favourite music.

A few months later there was an article in the newspaper about the Clarke Sinclair radio school. After a phone call to Clarke and a visit to meet him, I joined the radio school in January 1972.

In November 1973, I was getting paid for playing my favourite music when I started my radio career at 3YB.

It was a dream come true. Part of the dream was the opportunity to meet and interview many of the top performers of the time. The interview that I hold closest to my heart was the first one I ever did. It was a live to air interview with Daryl Braithwaite and Garth Porter from Sherbet in 1974 when they were one of the most popular groups in the country. Another dream moment was the opportunity to meet Roy Orbison and shake his hand.

In 1977 3YB became an automated station which meant that our voice announcements were pre- recorded and all components of the program were played in the correct order by a computer.

This was a sad moment for me. There’s real magic about a live radio studio, but if you pre-record the program the magic is not there.

As my passion for radio started to disappear, I decided I needed to pursue my other passion…driving. I looked for a truck-driving job and finally I found one that ticked all the boxes in 1984.

In 2008, one of my workmates was the famous Crunchman from 3WAY-FM. Knowing my 3YB background, Crunch invited me into the studio to watch him working on air one Friday afternoon. As I watched him doing his shift live to air, I thought this is similar to the live radio I loved at 3YB, before the days of Automation. I realised that I had not lost my passion for radio after all. It was still there, just as strong as ever.

Beamesy gave me an opportunity to fill in for him a few weeks later, and in the weeks leading up to that, Crunch answered all my questions about the panel.

I filled in for a few presenters until December 2008 when Michael Peart gave me his Friday night time slot.

Ev joined me on the program about 4 years later. Ev and I married in 1980. We have one son Jason, who is married to Lizzi, two grandsons and twins on the way. Life is very busy, not much time to take it easy, except on Friday nights for 2 hours between 10 and midnight.

Hope you can join us.

I have been working on 3WAY since 2012. My interest in radio began when I would go in to the 3YB studio to watch Graham when he was live to air in the late 1970s. It was a great way to escape the stresses of studying nursing. I was always fascinated by the precision and timing required to operate a panel and being able to speak simultaneously, presenting information and music.

Graham enticed me to learn the panel after I qualified as a marriage celebrant. I needed the skills to be able to use a microphone and learn how to project my voice. Working on 3WAY has been a great way of gaining that skill, but also getting enough experience so that I can operate the panel solo should Graham decide not to be there for the program.

Due to work commitments as a nurse (shift worker), I have not always been able to be on air with Graham, but he is happy flying solo.  I enjoy presenting the show with him and the banter and light- hearted approach we produce.

There are many genres of music I enjoy, but, for the show, we focus on the 60s to current day, enabling us to present the latest music as it appears on the music scene.

In time, I would like to have my own show, but for the present while I am still working, it will remain the ‘Take It Easy’ show with Graham and Ev.