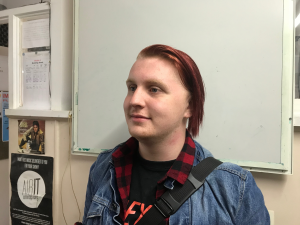 It’s 2018 and Jake Dotson is just 19 years old. Jake has dedicated himself to the listening entertainment of others for the past 5 years, going from a complete rookie kid to a dead-set focused young adult in his currently short, but incredibly fruitful, time at 3WAY- FM. He is more than happy to give up an hour out of his week to create and provide entertainment on the radio. It doesn’t matter if it’s a hundred people he’s talking to or simply his mother enjoying the mixed variety of music he loves playing so much as Jake believes that people just need entertainment and someone has to provide it so why not someone like him?

When it comes to defining this kid’s style, there’s just such an irony in how much stands out for the host of a show called ‘This is Everything’, in that while he and his best mate (who is co-host of the program) want nothing more than to keep things spiced up and deliver a good surprise or two with every show, Jake’s always a natural child at heart despite being stuck in a deceptively younger looking 19-year-old’s body. And you’ll be shocked to hear that he’s also American!

Along with his quick wit, love for puns, and a very noticeably strong chemistry with his co-host and best friend Cooper, Jake loves nothing more about the show than the fact that not only is he given his own voice to freely and often creatively express himself and play off all his best qualities with his friend, but he’s also seen the show itself transform from ‘Youth Radio with Nic, Keelan and Jake’ to ‘This is Everything with Cooper and Jake.’ And in that time, he has also been exposed to a much wider taste in music than he’d formerly been accustomed to, extending his range in musical taste that would later prove more than fitting for the show’s title of ‘This is Everything.’

As for handling himself with his unique voice, he often feels most out of his shell when he’s playing off jokes and quips with his co-host or discussing topics the both of them know and care about deeply. Most of the time, the boys deal with everything on air spontaneously, refusing to script anything as they feel that stumbling over themselves and occasionally making complete idiots out of themselves is more entertaining to their listeners than sounding like The Terminator is coming for them (they do make exceptions for the people who care about the local news and weather of course).

Jake loves to bring a childlike and positive attitude with him whenever he’s asked to take over on other shows such as his former co-host’s mostly music show on Saturday mornings ( Nic Trewartha’s ‘Pirate Radio’). Then he takes on the challenge of having to adapt and mould himself in a different way hosting-wise in order to provide the same level of entertainment and style that programs that aren’t his own have, believing that you should always give people what they’ve always been expecting, if not more, no matter whose voice is behind it.

Taking his fruitful experiences so far as well as his love and natural talent for radio presenting with him, Jake also intends to go further and perhaps even beyond his current capabilities in the radio entertainment industry hoping that someday he’ll be able to make a healthy living out of his most loved hobby and manage to bring a smile to someone’s face and even make someone’s day everyday as he does so. It’s great to have Jake as a presenter at 3WAY-FM.