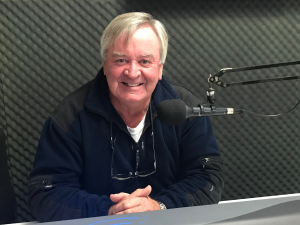 James Moran is part of the trio of regular presenters who share hosting duties of ‘The Beat Goes On’ (Sunday 11am to 1pm). Talking about the show, he says “I play generally ‘60s to ‘70s rock’n’roll because of my age (63) whereas Ann and Stuart play more tracks from the ‘50s to the ‘60s. I try to play a lot of the music I grew up listening to.” James enjoys most musical styles except for rap. Some of his more recent favourites include Angus and Julia Stone’s ‘Big Jet Plane’ and Coldplay’s ‘Clocks’. In his teenage years, his sister took him to ballroom dancing classes where he learnt to really listen intently to the beat of the music. That experience has enabled him to enjoy a wide range of musical styles, especially tunes that are easy to dance to. James was born in Geelong where he started school; he finished his schooling in Warrnambool. He completed his plumbing apprenticeship and worked in Warrnambool for several years before spending three years working in Melbourne. He returned to Warrnambool and worked, as a plumber, at the hospital for 32 years. His family enjoyed the stability of life in Warrnambool. Son Steven has a degree in Science and works for the government in Canberra; daughter Kelly is a beauty therapist and has her own business in Collins Street, Melbourne. James’ contribution to 3WAY has extended beyond music. He played a major part in putting together a re-configured Studio One; the supporting metal bars underneath the desk and benches were all welded up by James. He became involved after Phoenix (fellow presenter) mentioned that he wanted to change the set-up.