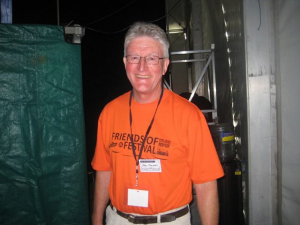 John was born in Colac. His family moved to Camperdown when he was 4. He attended Camperdown State School and High School, dropped out of first year medicine at Melbourne University, studied Woolclassing at the Gordon Tech in Geelong and worked in shearing sheds all over Australia in the 1960s. He then trained as a Trade Instructor and in 1969 was posted to Hamilton Technical School to teach Sheep and Wool. He subsequently took a diploma through the Warrnambool Institute of Advanced Education and taught in the Humanities. In 1990 he transferred to Cobden Technical School where he was appointed Vice Principal and then to Colac Technical School in 1994 as Principal, retiring in mid 1998.

His first involvement with radio was in the 1980s at 3HA in Hamilton as a representative of the Hamilton Golf Club. He was filling in for the member who usually did the spot but was on holidays. There were three short sessions: Friday evening, Saturday morning and Saturday evening. The studio announcer ran a sports program and people from various local sporting groups did previews, results and club news. Sometimes he had to record in advance using reel-to-reel tape! To his surprise, when the regular presenter returned from holidays he handed the spot over to John permanently!

He was also extensively involved in amateur theatre during his 21 years in Hamilton.

When he went to Colac Technical School at the beginning of 1994, some staff were involved in what was then called Colac Public Radio (CPR) now called Otway Colac Radio (OCR) It was an aspirant community station at that stage and he did a jazz program during the test broadcasts, and also, with the help of staff and students, did a program called “Tech Talk,” with news and general information about the Technical School and the many activities that it was involved in.

John knew about the development of CREW, which later became 3WAY, from Warrnambool friends, but didn’t get involved until he moved here to live in July of 1998. He answered the advertisement in The Standard for the Spring Season of that year and got a jazz program, which later became Saturday Jazz, which is still going strong 20 years on. He also joined a group of people who presented “The Music’s Fine,” an hour of classical music between 6 and 7 p.m. on Monday to Thursday evenings. That same year he attended his first 3WAY AGM, was elected Vice President and has held an office-bearer position on the committee ever since.

When 3YB dropped its long established live coverage of Hampden League Football, the idea of 3WAY taking it on was raised and after much discussion was agreed to. 3WAY’s coverage became very popular and led to an expansion of our listening area from basically the Warrnambool city area and immediate surrounds to the much larger area we now serve. This involved the establishment of a transmitter on Mt Warrnambool and a change from 100.9 to 103.7 MHz. It was a major project.

Through attending a CBAA conference John became interested in the wider community radio sector and after a couple of unsuccessful nominations, was elected to what was then the National Committee, now the Board, where he represented small, regional stations for 8 years, the latter four as Vice President – Radio. He stood down from the CBAA Board in 2012 and was greatly surprised and honoured to be the recipient of the Michael Law Award.

“Saturday Jazz,” now shared turn about with Kevin Byrne, continues between 11.30am and 1.00pm every Saturday and “Morning Talk” is on Thursday mornings between 8 and 10 am.

John’s other interests and pursuits include playing in the Warrnambool Symphony Orchestra, singing in two choirs: Cantori and The Resonators, and playing flute in small instrumental ensembles. He can’t resist cryptic crosswords and hacks his way around the golf course, mostly with the Veterans! He can shear a sheep, fly a light aircraft and play the flute, but not all at once! He doesn’t know what he’ll be when he grows up.