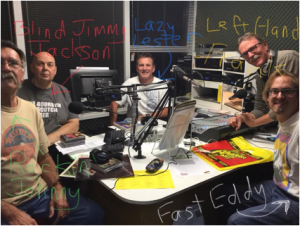 I started on 3WAY in 1993 as a semi-regular guest on a breakfast program called Cowtown, presented by two of my work colleagues. We had a ball. I enjoyed it so much that I became a regular, and eventually took on the program myself with a range of other partners who came and went over the next five years. During this period, Mona Swinton talked me into becoming a committee member. I spent a number of years on committee, including taking on the roles vice-president and president.
My love of blues music, established during my teens, had been rekindled since I had arrived in Warrnambool from Queensland in 1989. I religiously listened to, and often recorded, Wally Edney’s wonderful program, Blues on the Boil, every Wednesday night. Wally opened me up to many new artists and expanded my record, then CD, collection!

In 1998, I secured an evening timeslot for a new blues program, JuzBlooz, and took on the name of Lazy Lester, a name that I “borrowed” from a real blues artist in Louisiana. It’s a long story, and there would be quite a few people around 3WAY who’d be unaware that I actually have another name! In its first season, JuzBlooz and Blues on the Boil ran over two consecutive nights. Then Wally left town, and JuzBlooz carried the flag for the blues on 3WAY, along with several other programs that came and went. But JuzBlooz was a stayer, and has run continuously for the past 20 years. It’s been a fantastic ride. Preparing and presenting my program is my weekly dose of therapy. John Lee Hooker says that the blues is a healer. That is certainly true in my experience.

For the 20th anniversary JuzBlooz program in March 2018, I invited the other 3WAY blues presenters into the studio for a “blues-off”! Blues has never been stronger on 3WAY in all the time that I’ve been presenting, and the blues presenters are a bit of a community themselves. You can hear some awesome blues on programs presented by Rockin’ Johnny, Left-Hand Frank Davidson and Blind Jimmy (Paul) Jackson (some of these nicknames are fairly recent! Paul is now known as Lonesome George), with Fast Eddy Boyle and Tim Conlon regularly appearing as stand-ins on JuzBlooz and guesting on a range of the other blues programs.

Lastly, none of this fun would be possible without the tireless work and expert input of our wonderful committee, whose efforts keep 3WAY-FM on the air and continuously improving. Thank you!