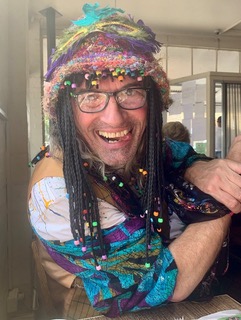 Martin Sullivan is host of ‘The Martin Show’ on 3WAY-FM every Wednesday and Thursday from 1pm to 2pm. Martin was born in London in 1960. He reckons that he ‘went feral’ the day he left school and enjoyed a misspent youth living some very alternative lifestyles. Amongst other things, he created a mods and rockers style bike club and roared around the streets of London on Nortons, BSAs and similar machines. Martin states: “By chance, I became involved with Radio Caroline, but avoided arrest on the North Sea, living to fight another day. Worked at various jobs…briefly worked for a TV company creating adverts and later became a scruffy security guard…got sacked from IBM for creating a computer program that would have crashed the IBM 3750. This was arguably ‘the world’s first virus’…decided to tell the manager…seemed to me to be smarter than unleashing it…the next day, he decided that ‘Your hair is too long’ as he escorted me out of the building. From there, I became a New Age hippie and caused havoc for some years across Southern England, getting arrested at the Stonehenge ‘Battle of the Beanfield’ (Google it) while driving a 41-seater bus across paddocks followed by the police and with helicopters in pursuit. I like to think of that as my ‘Eureka Stockade’ moment, but the UK government does not agree! Let’s jump a year or two (too weird) …set up a Christian community in Glastonbury, England and was blessed to become Br. Martin by Rev. Bishop John Thompson!!! Left that scene and got married twice (not at the same time) to two Catherines, number one and number two, then spent six years in the United States before finally settling here in Australia. I’m still doing crazy stuff…like running an Art Farm, street comedy, being a minor maker of mischief, creating and playing music. I certainly do all I can to have heaps of fun and enjoy life, hopefully with and alongside all the wonderful people who happen to be here too. Yippee! Anchor dropped!