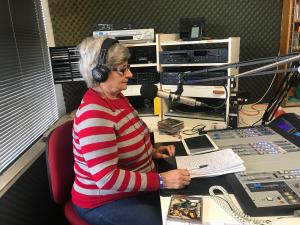 May Patterson hosts ‘More Country’ from 7am to 9am every Wednesday morning and a blues and rock ‘Saturday Night Special’ once a month from 7pm to 9pm. This is her story.

“I was born in Broken Hill, NSW in 1946. When I was 4 years old we moved to Dareton, NSW between Mildura, VIC and Wentworth, NSW. When I finished school, I left home aged 15. When I was at home, I began listening to country music from 3MA Mildura. The program was called ‘The Hillbilly Show’. I lived in Mildura for a while and got involved in the Marching Girls and Ballroom Dancing; over the years I moved around a lot. I was a bit like a gypsy. I played darts and won a few trophies in Wonthaggi.

In later years, and after a marriage breakup, I moved to Warrnambool where I started work in aged care. I also became involved with 3WAY’s radio station. I stayed in Warrnambool for 10 years before moving to Melbourne for a while, but I hated it there.

I came back to Warrnambool and also re-joined 3WAY. I am a member of the Warrnambool Lions Club and I love my country music.”