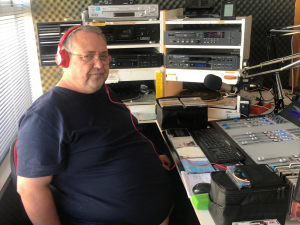 When Michael Peart arrives by car at 3WAY in Warrnambool, he unloads dozens and dozens of CDs and vinyl albums. Some are in boxes; others are in large plastic bags. Michael is a serious collector of rock and pop music. He is particularly interested in Australian artists, especially those who recorded in the 1980s. Every Saturday from 1pm to 5pm, on the ‘Classic Rock Show’, Michael plays a smorgasbord of tracks from his vast collection. And his knowledge of recording and release dates is impressive. His playlist is varied although he tends to favour rockier tunes rather than just straight pop songs.

Michael started his involvement with 3WAY in 1988 and he has fond memories of the ‘underground’ studio premises in Kepler Street near the site of The Criterion Hotel. When he first started on air, he hosted the midnight to dawn shift of ‘Hits and Memories’. He began operating the ‘Classic Rock Show’ in 1990 and has been its presenter ever since that time. Michael also presents programs on Portland community radio station 3RPC some of which he shares with fellow presenter Wayne Harry. Michael lists INXS and AC/DC amongst his favourite Australian bands. Michael spent most of his life in Port Fairy and he now lives in Hamilton. When he is not listening to music or playing it on the radio, he enjoys exercising in his local swimming pool.