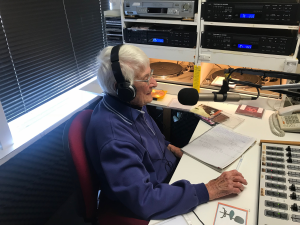 Mona Swinton has been involved with 3WAY since the beginning. She is still an active member of the on-air team and remains a staunch supporter of the 3WAY community. This is her story.

“At the age of 96+ I am claiming to be the oldest radio presenter in the Western District doing regular weekly shows. My shows are ‘Stardust’ and ‘Afternoon Delight’. ‘Afternoon Delight’ has been running continuously since the early test broadcasts in the ‘80s.

I had my Amateur Radio Licence so it was a natural progression into Community Radio. I was a pioneer for CREW FM in 1984. Our office was in my spare room until we were able to get the use of the dungeon located under the McCulloch and Peters offices, next to the Criterion Hotel.

I was born near London, Ontario, Canada and I grew up during the Depression Years, finished High School and entered the local Secretarial School where I did well in shorthand and typing. In early 1940, I answered an ad from British Securities for typists to work in New York—the Mecca for many young Canadians. I got the job along with five other girls from London. I didn’t tell my mother, but she got a shock when my travel papers were delivered by Special Delivery one Sunday morning. A week or so later, we left for New York which was a major turning point in my life as I had just turned 20.

The work involved using the famous Enigma Code Breaker machine. It looked like a typewriter, but operated in a different way. The system was made up of five narrow wheels with the alphabet scattered through them. You pressed a key firmly, but another letter appeared in print. It was not speed typing. The office was on the first floor of the International Building in the Rockefeller Centre on Fifth Avenue. It was quite normal to see well-known movie actors and other VIPs walking around the streets. I stayed there until the war ended; the job also finished. Rather than return to Canada, I got a job with the Australian Mission to the U.N. and, later, with the Australian News and Information Bureau. I went back to school to brush up on shorthand and typing and eventually got a job in a travel agency in San Francisco. That gave me good opportunities to travel overseas.

I married an Aussie and moved to the Gosford area. We retired to Warrnambool in 1979 when I renewed my interest in drawing and watercolour painting. I also did an Arts Degree. The love of travel was always there and has continued to this day. My other interest has been bird watching for many years with regular weekly short trips around the district.