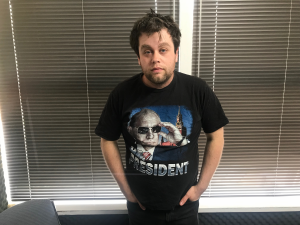 Nic Trewartha presents ‘Pirate Radio’ every Saturday from 10am to 11.30am. Anyone who listens to his program can hear the enthusiasm in his voice; Nic’s vibrant delivery is energising and infectious. He is passionate about all forms of media—music, movies, magazines, books. His music choices are eclectic while his film reviews are entertaining and insightful.
Ask him how he got involved in radio with 3WAY and he responds “It was all because of my mum. She knew that I was really into media and I was studying for a Diploma in Screen Media at TAFE. She encouraged me to get involved with Waveform Media and they got me involved at 3WAY. Initially, I was part of Warrnambool Youth Radio and I worked with a co-host on the program ‘This Is Everything’. Eventually, I became too old to be involved with Waveform and, when the host of ‘Pirate Radio’ had to leave for various reasons, I was able to take over hosting the ‘Pirate Radio’ program.”
The previous presenter of ‘Pirate Radio’ played a mix of mainly mainstream music, but Nic prefers to play what he calls ‘kick-ass’ music. He explains: “I’ve always hated the music you hear on the commercial stations…to me it’s just terrible…so I try to play the stuff I personally like and want to hear while also trying to keep it diverse with different genres, sub-genre styles and what not…”
Nic is not only fascinated by various styles of music, he is also keen on films and film-making.
“Ever since high school, I’ve always wanted to be a film-maker and that is still my ultimate life goal. I’m open to getting a job in some area of ‘the media’ and maybe my work at 3WAY could lead to a job in commercial radio, but in the long run I still want to try to become a film-maker.”
Nic’s first-year student project was a short film titled Attack of the Killer Chairs. One day he may find the time to make a sequel.
Nic’s favourite bands include Edguy, Helloween and DragonForce, but he also enjoys Frank Zappa and Ozzy Osbourne. His favourite genre of music is ‘power metal’ which, as he explains, “isn’t like death metal…you can actually understand what the singers are saying, the lyrics tend to be more fantasy-focused, there’s a faster beat and higher-pitched singing.”
Outside of 3WAY, Nic is “really into gaming” and he makes YouTube videos where he reviews at least one game each month. He also dabbles in drawing and portraiture.