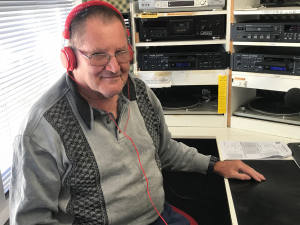 Norm Bryce has been involved with 3WAY for many years. He used to present a ‘Jukebox Saturday Night’ program, but since September 2017 he has been co-hosting ‘Good Times & Great Classic Hits’ with Wayne Harry and Ben Gardiner on Fridays between 11am and 1pm. Every two weeks, on a Tuesday, Norm and Wayne make the trip to Portland where they are on-air from 2pm to 5.30pm with a music show. Norm is an Elvis Presley fan and he also enjoys listening to country and western music. He particularly likes Aussie artists such as Lee Kernaghan. Apart from listening to music and watching television, Norm spends some time with ‘Lightning McQueen’, a little bright red car equipped with a 3.5 horsepower Briggs & Stratton motor. He reckons it goes ‘really fast.’