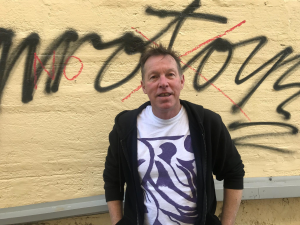 Like all 3WAY-FM presenters, Peter Simpson is an avid music fan. He hosts ‘Cellophane’ from 7pm to 8.30pm every Tuesday night. Peter reckons that he chose the name ‘Cellophane for his program because it covers a wide range of material. ‘Cellophane’ is also the title of a King Gizzard song and that band (King Gizzard and the Lizard Wizard) is one of his favourite outfits. On his program, he plays mainly new Australian music…punk, rock, grunge and “the occasional nice song by Courtney Barnett.”

Peter loves not only playing Aussie artists on air, but also going out to gigs to see them performing. His enthusiasm for ‘live’ gigs may be seen in the fact that, every now and then, he rounds up a group of friends from the Framlingham area where he lives and drives them into Warrnambool to see a local or touring act, usually at The Loft or The Whalers. And Peter often travels further afield to see bands in Geelong or Melbourne. He gets a bit bored with music sometimes so his list of favourite acts keeps changing, but King Gizzard, Cable Ties and Primitive Calculators are definitely on his radar. He really enjoys discovering new up-and-coming bands and wants to encourage people to get out to experience more ‘live’ music.

Peter is a little shy with people in public, but once he is behind the microphone at 3WAY his confidence increases and he is happy to introduce listeners to new and ‘alternative’ Australian rock groups, many of whom are not usually heard on mainstream commercial radio stations.