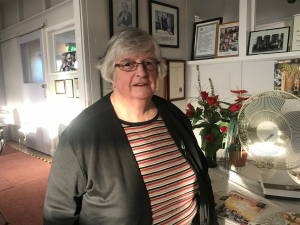 Rita hosts ‘Irish Breakfast’ on 3WAY-FM every Tuesday from 7am to 9am. She also presents ‘Music, Music, Music’ from 4pm to 6pm on Tuesdays and she participates in the Sunday Morning Country program with Val and Graeme. This is her story.

“I was born in 1940 at St. Jude’s in Koroit and spent my first 18 years at Kirkstall, but have lived in Koroit since then. My primary education was at St. Brigid’s, Crossley and, in my secondary years, I attended Good Samaritan Covent, Koroit. After I completed my secondary schooling in December 1955, I was offered an office position and began work in February 1956 with the local gas industry. I retired in July 1996. Over the years, I saw lots of changes. At the start, everything was done with pen and paper, but later converted to electric ledger machines, adding machines, calculators and computers. I handled a great deal of money from pounds, shillings and pence to dollars and cents. I experienced the change from coal-fired gas to natural gas coming from the plant at Paaratte to Warrnambool, and then extending to Hamilton, Portland and Koroit and other areas.

I have participated in competitive netball (sometimes, 3 times a week in Koroit and Warrnambool). Plus tennis with different clubs—St. Pat’s, Koroit, Cudgee, Naringal, Winslow; Lawn Tennis, Supergrasse and Indoor. I also played Basketball, Badminton and Squash. I follow the local football/netball teams and take an interest in AFL (Geelong) and NRL (Storm). Just a couch potato follower of other sports such as golf (Marc Leishman).

My interest in music goes back to childhood. We always had a wireless at home. The dial changed often from local stations as we found the Top 40 of the day, country music and old-time dance. The teenage years saw us going to The Palais in Warrnambool on Saturday nights (we had to ride pushbikes with no gears to Koroit in order to catch a bus) and Crossley on Sunday nights. Sometimes, during the week, there would be a ball to attend at Allansford, Panmure, Crossley or other places. I remember the scrumptious homemade suppers with everything from sandwiches, sponges and cakes to crayfish.

After retiring from the workplace, I did a few overseas tours—Ireland, New Zealand, UK & Europe, Toronto and Hawaii. I undertook volunteer work at Lifeline Warehouse for 5 years and, in 2005 when an advert appeared in the newspaper for new radio presenters, I applied to 3WAY and was lucky enough to get a timeslot. ‘Music, Music, Music’ was born. Mark Swinton gave me some training with regards to the panel, microphone and headphones. I kept applying for a spot to play Irish music and eventually got a one-hour slot on Monday afternoons. When Stuart finished his Tuesday breakfast program, I applied for that and was successful. Hence: ‘Irish Breakfast’. I won a Mona Award for ‘Best New Program’ that year. The comedy segment with Noel V. Ginnity is very popular and has lots of listeners. I saw Noel when we were in Ireland and attended one of his cabaret concerts in Dublin. We also went to an evening at Gleneagles out of Killarney where we were entertained by Declan Nerney’s Dance Band (Good music!). Country music has always been a love of mine. It’s good to be a part of ‘Sunday Morning Country’ and to be able to fill in for other presenters when needed, no matter what type of music is required.

Some things you may not know about me: my christened name is Marguerita. I have 4 sisters, one brother, 5 in-laws, 25 nieces and nephews, 58 in the next generation with another generation following. Sadly, one sister and three brothers-in-law have passed away, joining our two small angels.

I won a CD on Mark Struth’s show in the early 1990s and, more recently, another CD on Vic’s ‘RadioActive’ program.”