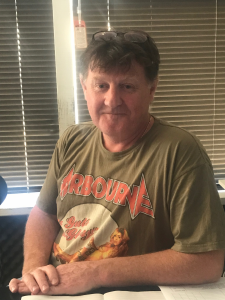 Scotty Giblin is the presenter responsible for the program ‘Hungry Daze’ which is broadcast every Sunday on 3WAY-FM from 3pm to 5pm. He has been involved with the radio station since 2002 and he reckons that it was “the great John Warren of ‘Soul Sacrifice’ fame” who got him going.
Anyone who listens to ‘Hungry Daze’ will soon realise that Scotty is a huge music fan. Not only does he play tracks from bands he likes, he also reels off statistics in considerable detail about albums, band members and gigs.
Most of the music featured on ‘Hungry Daze’ is hard rock and blues.
Scotty’s favourite band is Deep Purple. He lists Rainbow, Led Zeppelin and Thin Lizzy amongst his most-liked outfits and admits a preference for British groups although he doesn’t mind some American rock acts like Van Halen, Heart and Chicago. Blues guitarist Walter Trout is on his ‘hit’ list as are Stevie Ray Vaughan and Carlos Santana. Even Jimi Hendrix occasionally makes it on to the ‘Hungry Daze playlist. Rock bands Electric Mary, Massive and Airbourne rate highly as Aussie favourites.
When not on the radio, Scotty can often be found supporting local and visiting pub bands in various Warrnambool venues. He reckons that young band The Refuge, from Lavers Hill, could have “a big future.”
Scotty doesn’t play much sport, but he enjoys watching football and cricket; he’s also a fan of car racing. Reading is another hobby.
Scotty recognises that what he does on the radio is somewhat ‘self indulgent’, but he is encouraged by listeners who call him to request a song or to say that they are enjoying his selection of music.