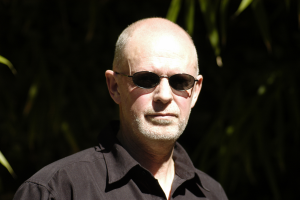 Vic began hosting the ‘RadioActive’ program in February 2016. He enjoys playing a mix of pop, rock, country and Americana songs on Friday afternoons from 1pm to 4pm. He includes a Comedy Spot, a TV Guide and a local Gig Guide in the program. Occasionally, he conducts in-studio or phone interviews with performers or local identities. ‘RadioActive’ received the MONA Award for the most popular Friday program in 2017.
Vic grew up in Northern Ireland listening, as a teenager, to BBC Radio, Radio Eireann, Radio Luxembourg and pirate stations such as Radio Caroline and Radio London in the 1960s. His love of ‘radio’ grew after migrating to Melbourne in 1966 and he enjoyed the variety of commercial stations available throughout Australia.
After a career as a secondary school teacher and as a youth worker, he completed a radio announcers’ course and began making programs. His work was broadcast on 3ZZ and 3PBS-FM before he landed a job, in 1987, researching, scripting and hosting a weekly 30-minute music, news and information program broadcast nationally on the ABC AM Band. He spent four years as Music Director and Assistant Programmer with Rev Tom Stokes on Sunday Nights at FOX-FM before presenting a series of early Sunday morning shifts on 3AK.
In the mid-90s, Vic and his wife Marg lived in Nashville for two years working in the music industry. Vic has authored two books, both biographies of Aussie musos.
The Campbells have two children: Liam, who lives in Alice Springs with his partner and son, and Bridie who resides in Warrnambool with her husband and two boys. Vic’s hobbies include collecting music (on CD, DVD, vinyl and cassette), reading books (on music and pop culture) and watching films (all genres) and television programs (especially Westerns, crime shows and British dramas).