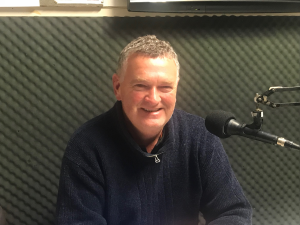 Known as ‘Beamesy’ to 3WAY listeners this presenter has hosted several different programs on the station. He is currently the voice of ‘The Breeze’ every Wednesday from 5pm to 7pm playing a mix of pop and rock with the odd track from ‘left field’. Beamesy started with 3WAY around 1988 at the old Criterion Hotel. The first show he did was with Peter Goodman, filling in on ‘Party On The Patio’. Then he hosted the ‘Classic Rock Show’ on Saturdays from 5pm to 7pm in 1989. He describes the studio underneath the ‘Cri’ as “a little dungeon with thick stone walls, but it had a great atmosphere”. Beamesy’s favourite artists include Eagles, Fleetwood Mac and AC/DC. Before ‘The Breeze’ he called his program ‘Crossroads’ because his music taste was at a crossroads. He enjoyed various styles of music and discovered a lot of Irish rock performers through watching a DVD titled ‘From A Whisper To A Scream’. When he’s not on air, Beamesy listens to a jukebox in his shed at home; sometimes he’ll play songs on Spotify or from his hard drive, which contains about 170,000 songs. He has compiled quite a few playlists over the years, especially with songs not normally heard on commercial radio, but which can be discovered on community stations like 3WAY. He has enjoyed meeting and getting to know some fellow announcers, but admits that there are still many he does not know too well.