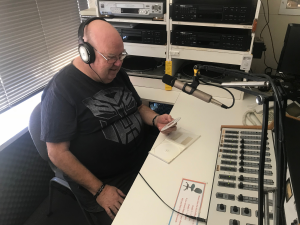 Brian was born in Melbourne in 1954 and moved at a very young age to Nhill. Nhill is on the Melbourne to Adelaide highway at the halfway point. After completing school in Nhill, Brian went to work in Melbourne at the tender age of 16. He lasted for two years in Melbourne before moving back home and worked at various jobs including one in Nhill Hospital. He worked in his parents’ store before buying it with a former school buddy and remained there until a move to Horsham in 1993. In 1994, Brian moved to Warrnambool and worked at McVilly Timber and Tasweld Engineering before starting his own business, jukebox hire and sales and hosted karaoke entertainment which he ran until his retirement.

Brian started at 3WAY-FM by replying to an advertisement in the local paper for a panel operator for David Horsfall and his country music program. He remained a panel operator for David until David moved to Melbourne and Brian briefly continued the country music spot until it was taken over by Jack Godfrey. Brian was offered a one-hour spot which, shortly after going to air, became a two-hour spot and then eventually the three-hour program now known as Jukebox Jive. He also hosts a one-hour spot on Tuesdays called Country Classics. When Colin Hendy resigned as office administrator at 3WAY in September 2016, Brian volunteered to offer some time as office administrator and, with his on air programs, spends approximately sixteen hours per week at the studio premises.